Merrigan's Arizona Road Runner RV opened in 1967, becoming the largest RV Parts and Repair store in Tucson, and Southern Arizona. We offer on "on site" and "in shop" RV repair. Including warranty, extended warranty, and insurance work. Give us a call, 1-520-887-2992 or email us, to get started. 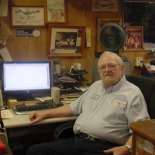 About Ricky Merrigan's, and a recap of experiences that all helped in the building and repairing of your RV.

I grew up with a background in road construction. IE: truck driving, cat skinner, rock crusher and all of their repairs and upkeep including welding. I bought my first truck at 14 years of age. 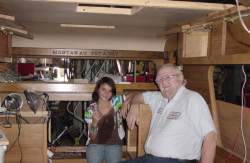 After about two months my brother, Jerry, moved down from St. Paul, MN. and became my partner. At night we would go look at competitors campers to see how they were built then we would go build one. In quick time we learned how to build all types of RV's. I would draw up plans (just using scrap papers laying around) for building shell campers, full size and loaded pickup campers, chassis mount campers, van conversions, trailers. Then Jerry and I would work up to 18 hours a day, 7 days a week. Our business was good and we built a better product than most. We had such a large parts & accessories inventory (stored at my home, etc.) that we decided to start an east side retail store. This went very well until Jim Click bought the whole block so we sold the store and business to someone that moved it to another site. We then bought the place I am now located.

I have three contractors licenses. One for building residential homes, one for building commercial buildings, and one for repairs of and manufactured homes. I've put two licenses on sabbatical. At one time I needed a #1 license to build two commercial trailers for a mining company, In order to obtain the license and approval I drove to Phoenix to the Arizona Contractors License Bureau with my plans and pertinent information in hand. They tried to force me to leave everything with them and they would get back to me. I wouldn't let them put me off and demanded to get things done now. So I met with the head engineer that had to approve the plans etc., which he did while I waited in his office. Thereafter they sent notice to everyone that there would not be any plans or licenses approved on the same day as applied for. I guess they don't operate like the business people that support them. It is their law that we, their customers, must be tormented and delayed as much as possible.

For many years we have had a very large inventory of parts and supplies in our store. We repair just about any problem with RV's and all appliances.

I would not trade places with anyone. I have the best there is in children, and especially grandchildren. The best business to be in which wouldn't be as great if it weren't for the great employees and the great customers.